You are here: Main page > History/About Us 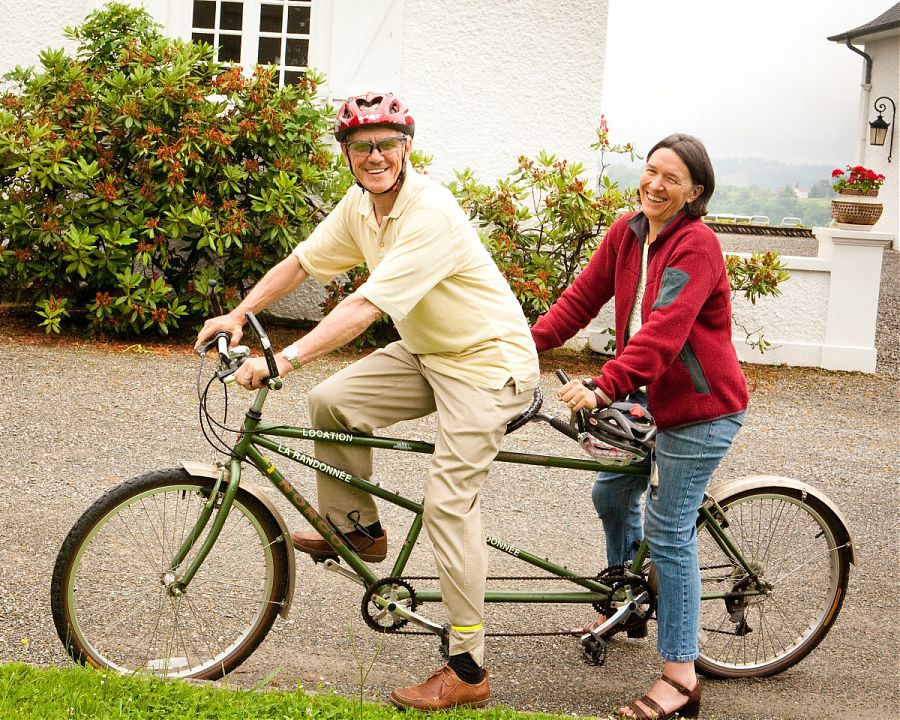 Much travelled Ann and André fell in love with Clos Mirabel and its breathtaking views over 13 years ago. They lived in the 18th Century Manor House for 2 years before undertaking a major renovation in 2005 retaining as many of the historical features as possible. The Clos Mirabel Estate now provides a hilltop haven in Bed and Breakfast and Self Catering Accommodation where visitors feel refreshed and inspired. A small seminar space has also been created which can be used along with the Manor House for small residential or non-residential groups outside of the main tourist season.

French-Canadian André is a retired diplomat; Ann worked in the travel industry and public affairs. They both have a keen interest in health and wellbeing which is reflected in their choice of Clos Mirabel and its outstanding location looking over vineyards, out towards the entire chain of the PyrénéesAtlantiques. Ann has a keen interest in psychology; daughter Emily attended French school and finished her secondary education at the international school in Pau.

The original house at Clos Mirabel was a very simple Béarnaise farmhouse built between 1732 and 1738. A small barn was added a little later. In 1825, the property was purchased by Jean Mirabel, hence the name, Clos Mirabel. At the same time he bought several acres of land that included the vineyard.

In 1921, the property was owned by an Englishman, Lord Hugh Faulkner, a colonel in the Indian Army. He was greatly attached to Clos Mirabel and with regret returned to the UK at the beginning of WWII. He died during the war and with no descendants, left his property to a friend and neighbour.

Electricity was installed in 1933 and running water in the 1940’s. In 1947, the owner made major transformations to the house incorporating the internal courtyard of the farmhouse to increase the floor space, raising the roof to create a second floor. However, the electricity and plumbing were left untouched.

In the mid 50’s, M. Dubois, a lumber merchant from Paris who had provided wooden chassis to Renault before the war, bought the property. He then transformed the small 18th Century barn into the very impressive Winery we see today.

The property had not known any major changes since the immediate post war period. The house was closed for most of the year since the owner lived in Tahiti. He had refused several offers on the property, particularly from developers, since he wanted it to remain the very special place it is.

Untouched since the end of the 1940’s, the renovation undertaken by Ann and André retained as many historical features as possible including fireplaces, wooden floors and most of the windows. The whole house was replastered in the traditional way keeping all the beautiful curved ceilings. Bathroom fittings from the 1940’s were retained wherever possible. The result is a contemporary house with domotic electricity, solar panels for hot water, under floor heating as well as environmental heat and air conditioning pumps.The pool is partly heated by solar panels and is open from mid-May to the end of October. The waste water at Clos Mirabel is treated by a natural system using reed beds, an environmental engineering project using technology developed in Germany.

All the plans and renovation work were carried out under the guidance and great expertise of Giovanna Anselmi, their Italian architect, who worked as a consultant.